Social media has repeatedly demonstrated its remarkable ability to connect old friends and inspire action. For all the positives and strengths that these online communities are able to provide, however, social networks are certainly not without their pitfalls and shortcomings too.

The risks associated with using social networks are well-documented. One of the biggest concerns has to do with privacy and safety, particularly with regard to children and teenagers, but also with adults.

According to GuardChild, 29% of "internet sex crime relationships" started on a social media site. Further, in 26% of "online sex crimes against minors," perpetrators distributed information or images of the victims via social networks.

Cyber-bullying is also a very big problem. According to a DoSomething.org survey, 70% of students report having witnessed "frequent bullying online" and over 40% have been victims of online bullying themselves. The vast majority (over 80%) of respondents indicated that online bullying is "easier to get away with" than in-person bullying.

The very nature of social networks can also lend itself to trolling, the act of intentionally posting mean or provocative messages purely to upset or anger other users. This could be due in part to perceived anonymity on the internet. Almost a third of millennials have admitted to engaging in trolling.

Stalking via social media is startlingly common. As 63% of Facebook profiles are public, it is very easy for exes to check up on their former partners and their new relationships. Oftentimes, you don't know who is viewing your profile and you don't know what could happen next. Over 80% of online stalking incidents are never reported to the authorities.

Nearly four in five ex-burglars have indicated that thieves watch social media to look for potential opportunities. This is because 57% of people post something about their travel plans, like a photo from the airport or "checking in" at the hotel, effectively telling would-be burglars when they should break in.

Keeping Up With the Joneses

Many of the psychological and emotional challenges associated with social media can be profoundly damaging for all age groups. This phenomenon can be attributed to two related factors.

Combined with the desire to validate your existence through the online currency of "likes" and positive feedback, these two factors can cause envy and lead to depression.

Frequent users of social media have been found to be 2.7 times more susceptible to depression compared to users who use such sites less frequently. This connection with feelings of depression is most closely related to "surveillance use" of social networks, wherein users frequently check on what their peers are doing and finding their own real lives to be not as good by comparison.

Especially with regard to politics and controversial subjects, social networking algorithms and friend dynamics naturally lend themselves to the echo chamber effect. People with more liberal-leaning philosophies tend to be friends with other liberally minded individuals, just as more conservative users tend to surround themselves with other conservatively minded users.

Because people tend to only "friend" or "follow" like-minded users, this gives the false impression that their opinions align with popular opinion at large. By giving the ability to block and "unfriend" users, social networks do not necessarily encourage positive discourse between people with differing opinions.

Social networking, with the noted exception of professional networks like LinkedIn, is mostly geared toward personal use as a casual, leisurely activity. However, social media addiction may be hampering worker's productivity when they are in the office. Workers who surf social media instead of doing work could be costing their employers millions of dollars in lost productivity. As a result, some companies block sites like Facebook on company devices. 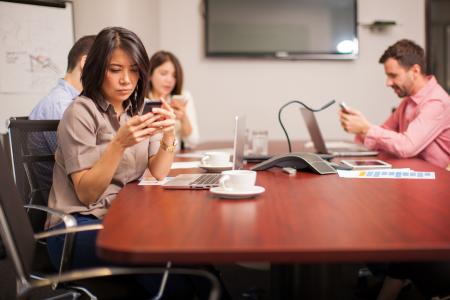 A study by the University of Maryland revealed that 18% of users cannot go more than a "few hours" without checking Facebook and nearly two-thirds feel compelled to check at least once a day. The majority of Americans say they go online to be entertained and not for something necessary.

For some individuals, personal use of social media has led to very negative professional outcomes. Many stories have been shared online about people who have been fired from their jobs for social media posts in which they complain about a manager, make negative remarks about how the company is run or unwittingly reveal company secrets.

Approximately one in five managers and supervisors have indicated that they have fired employees because of something posted on a social network. An even greater percentage have dismissed workers for using the internet for "non-work-related activity" on company time. This includes social media, as well as online shopping or personal instant messenger use.

Even though social media can be an incredible tool for fostering relationships with other people, it can also be a source of relationship problems. According to data released by the McKinley Irvin law firm, 16% of people indicate that social networking has resulted in jealousy in their relationships. Further, increased Facebook usage appears to be correlated with higher divorce rates. Pictures and posts on social media sites can indicate or be misinterpreted as evidence of infidelity. Additionally, even when online relationships never lead to physical contact, it's said that "emotional cheating is worse than physical cheating."

Ironically, online social networking can also contribute to a sense of isolation in real life, as users may disengage from real human interaction face-to-face in favor of virtual interactions. The scene of people staring at their smartphones at dinner instead of talking with the other people at the table is a familiar one. Paradoxically, the more time a person spends on Facebook, particularly with passive interactions, the greater their feelings of loneliness.

Damage to Physical Fitness and Health

There are clear negative effects of social media on physical health. The more time spent looking at social media, whether it's on phones, laptops or desktop computers, the less people are moving around physically and getting outside. Sitting for long periods has been associated with obesity, higher blood pressure, diabetes, heart disease and cancer. Research has also found that screen time can lead to changes in metabolism that can lead to obesity and diabetes. Excessive screen time can also affect sleep patterns for the worse.

The instant communication of social networking sites is very similar to that of texting and instant messengers. As a result, people are more inclined to use the same kind of short-hand abbreviations and "net-speak" that can drive others crazy. People have become less vigilant with their social posts, resulting in a "general attitude" that they no longer need to conform to proper spelling or correct their grammatical mistakes.

Children today don't spell as well as previous generations and, on the whole, the internet is making writing worse. Some 40% of teachers surveyed feel that technology use has degraded students' spelling and grammar and a whopping 94% think students should write by hand more often.

Be Responsible and Sensible

Social media continues to be a positive tool that can be used to accomplish great things. It can foster creativity and social networks are terrific for connecting with people around the world. The important thing is to exercise common sense and restraint when using such sites as Twitter, Facebook and Instagram to avoid potential pitfalls . Have fun, stay safe, and be mindful of what information you put out there.